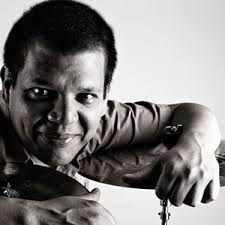 Train (pendeltåg) to Ulriksdals station and then 5-10 min walk.

If possible, bring a cajon. Evaristo will do a clinic around cajon playing and also talk about his work as a musician and teacher.

EVARISTO AGUILAR is Professor of Percussion at the UNIVERSIDAD AUTONOMA DE TAMAULIPAS in Tampico, Mexico. He earned the degrees of DOCTOR OF MUSICAL ARTS and MASTER OF ARTS (MUSIC PERFORMANCE) from the UNIVERSITY OF SALFORD in Manchester, England. He has studied in Mexico, Canada and the United Kingdom. He is a disciple of the masterful South Indian percussionist Trichy Sankaran.

He has developed different projects of rhythmic initiation for children and major percussion works based on the stylization of the huapango music and dance (a traditional genre of the Mexican folklore in the Huasteca region), collaborating with composers, researchers, performers, writers, photographers, sculptors, dancers and visual artists from all over the world. He has taught and performed in China, Australia, Switzerland, Germany, France, Sweden, Austria, Poland, Italy, Spain, Croatia, Slovenia, England, Canada, United States, Argentina, Brazil, Chile, Uruguay, Cuba and Puerto Rico.

Evaristo is the founder president of the PERCUSSIVE ARTS SOCIETY MEXICO Chapter and the artistic director of the PERCUSONIDOS FESTIVAL (Tampico International Percussion Festival) and of the TAMPICO INTERNATIONAL FORUM OF MUSIC EDUCATION. He is an endorser of Zildjian Cymbals, Latin Percussion Instruments and Innovative Percussion drumsticks.